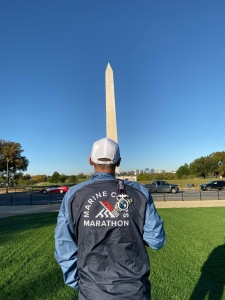 It’s been a hot minute…err….a few months since I have given any updates. A lot has happened in the last several months since my last post with life in general. I have moved to Chicagoland after a divorce and still doing my thing pounding the pavement. I’ve had a few PRs (in a 5k and half marathon) and also a few ‘bad races’ which happens to some of the best in the world.

I had a summer of chasing sunrises with a near perfect training cycle for the Marine Corps Marathon in October.

I have had a few days to reflect on marathon number 3. This one was the most challenging runs I have ever had. The first 6ish miles were all hills and lots of rain. I was hitting my goal times through about the half part of the race with my feet feeling like I was running with bricks as shoes.

I came to Blue Mile and took my headphones off and looked at every sign and name on the side of the road I was running on. 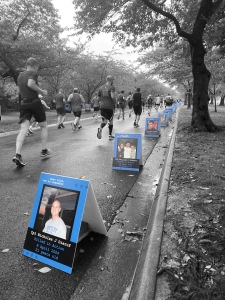 I didn’t get “emotional” like I thought I would until I saw the family members holding the flags in the next half mile or so. About this time, the rain starting coming down in buckets and the winds picked up to about 30 mph in my face. All I could think is what I was enduring is nothing like what our military and their families endures.

The rain slowed at about mile 18 for me and I was about done physically. The sun was beating on me and it heated up fast. The humidity was insanely high. I think I was overcompensating and taking in more water which in turn, upset my stomach. I was ducking in and out of bathrooms for next 4ish miles. I was on the bridge heading over to Crystal City and felt defeated watching pace groups with slower times passing me. When the 5 hour pace group passed me, I thought to myself I wasn’t going to let another one pass me. I had to dig deep and move at a slow pace, but I stayed ahead of that 5:15 pace group (my goal was 3:45).

I came up the hill to the final finish hurting like no tomorrow. My body was spent and realized the heat got to me bad. At the time, it was about 75 degrees. I had the honor of Lt. Peter Freeman placing my medal around my neck. 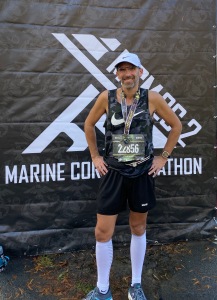 Not all marathons go as planned. It was by far the worst time I have run, but it was the experience and what is behind the history of the Marine Corps Marathon and what made it special and a memory of a lifetime. Official time – 5:12:18

On the Crohn’s front, things have been going well. I have stayed away from flares and my Humira is still doing the trick.

I am hoping for 2 marathons next year again as I chase that sub 4 hour mark. The first one is looking like the Carmel Marathon in the spring. I have put myself in the lottery for Chicago so we will see what happens come Dec 12 when that is announced. If that doesn’t happen, I will go back to the drawing board and find a faster course to take things in and chase that PR.

Join 5,369 other followers
Follow Running and Chasing Medals with Crohn's Disease on WordPress.com