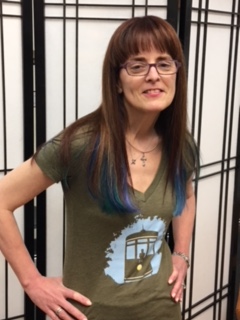 Mathelde has been struggling with Crohn’s for over 30 years now. She has had so many surgeries that she actually lost count of them and lives with an ostomy bag. Even with all of the surgeries and ostomy, she still hasn’t experienced remission from Crohn’s. Her drugs of choice right now is Budesonide, Omeprazole, and Linzess.

Even though Mathelde has had Crohn’s for basically as long as I have, she has different challenges that I have. She experiences pain on a daily basis, trying to work in tight quarters with a pouch has been difficult, and not being able to run. She actually ran the Chicago Marathon in 1993! Not only that, but she actually held the YMCA record in planking coming in at 13 minutes! She feels that is missing out on some of the fun.

One thing about Crohn’s which I have referred to in previous posts, it is a silent disease. Since it is silent, we learn to hide our disease well. Even if we are sick, we know how to hide it.

One thing that she is scared about is being a burden on her family when she can no longer change her own pouch. She has 1 son and doesn’t want him to have to deal with this.

“We go through challenges that you can never imagine because we are warriors. We will never let you see us sweat.” With that said, Mathelde runs a non-profit that helps women in crisis and unplanned pregnancies. She has a mobile ultrasound unit (which she is on all day). That’s just the beginning of what this woman has accomplished. She has also lived overseas and speaks several languages and has 2 Master’s degrees. Crohn’s WILL not keep her from being successful.

However, there are a few things that Crohn’s has held her back. She can’t run and eat like a normal person. She is exhausted all the time. When she gets home from work, she just collapses. She wishes that she could give her family the energy she had in her 20s.

Is it because of Mathelde I run.

You can donate here in support the CCFA.