This was a great week in the running realm of things. There were a lot of firsts that I was thrilled about.

I was in Chicago earlier in the week and had the opportunity to take a run on the streets of Chi-town a couple mornings. The first morning, I was able to run with a few of my co-workers and it was an easy run as we are all at different levels. We decided to do about a 3 mile run down to “The Bean.” We started the run at 6 and we got to The Bean right at sunrise. For those that have been there, there are always a ton of people there. The nice thing about getting there at 6:30ish in the morning, there is no one there and the sunrise reflection off it was incredible.

The Bean with Chicago skyline 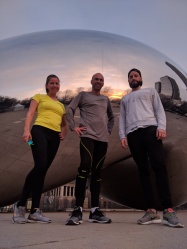 Running with co-workers and stopping in front of the Bean

The second day in Chicago, I got up and took a run by myself. I decided on a little longer run since I was by myself and wanted to get some miles in before a long day. It was a chilly morning and ran against the wind towards the lake…Brrrr. When I got to the lake, I ran south down towards Navy Pier. The wind was behind me at that point so it wasn’t bad at all and was actually breaking a sweat with a 20-something windchill. One thing that I have learned is running in a different city than your hometown, it is so much better than running by corn fields.

Sunrise on Navy Pier in Chicago

My big win for the week was a 9.5 mile run on Saturday. I have never run that far or that long in my life. I never stopped to walk except about halfway through to take some sips of water. I knew I had a pretty good pace going and was feeling great. When I got home, I looked at my splits and they were almost identical for each mile and was within a few seconds of each other. Three weeks into the training, I am feeling great and actually starting to like running. Overall, I ran over 20 miles this past week and am feeling strong.

160 more days before I will be running the streets of Chicago again.